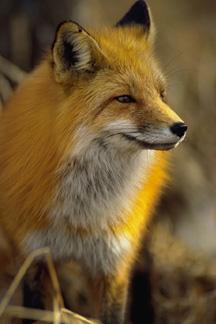 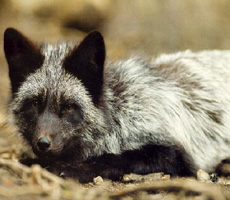 -Reddish orange fur, small dog sized; thick bushy tail in winter (horizontal kept while running), Topside copperred, Ear-outsides and shanks brown-black, Tailend and marking at the head white, downside whitish.
-Crossfox=white stripes across the Schoulders and lengthwise the back
-Ice-foxes have Crossfoxes too
-Black Fox=a silver undercoat and black-tipped guard hairs
-Head/body length: average 67-75(80)cm for males; 62-67cm for females (both between 18 and 37 inches)(Males are usually bigger than females)
-Tail about 40cm(45) (half length of body) (between 12 and 23 inches/ 1-2 foot)
-Weight: average 6-7kg(9 to 12 pounds) for males; 5-6kg(9 to 10 pounds) for females
-about 30cm high -usually reddish on back and face, white on underparts; tail bushy, white tipped; black legs and feet
-The red phase is red colored above, whitish below. The silver phase is almost completely black with silver tipped hairs, and the cross phase is reddish brown with a dark cross on its shoulders. All color phases of the red fox have a white tipped tail.
-One study found that northern red foxes are darker and its colors more intense than southern red foxes. For example, 70% of the red foxes in British Columbia exhibit the black and cross color phases. While in the Great Basin, further south, they make up less than 20% or the population, the red phase being more predominant.
-Gloger's Rule, a basic tenet of biology, states that birds and mammals living in the northern hemisphere tend to have lighter races living in the north and darker individuals in the south. While the "rule" obviously doesn't fit red fox populations, it is true most of the time.
-yellow, vertically slit eyes and a good night-vision (remarkable for a canine)

-Tundra, Taiga, Woods, Parks and land developed and cultivated by man till 1800m, in Tibet till 4000m.
-(in nearly all habitats from salt marshes and sand dunes to the tops of mountains)
-adapted to life in urban surroundings

-Day-,twilightactive.
-Foxes hold territories, the size of which depends on habitat; 0.2 square kilometres in urban areas or up to 40 square kilometres in hill country.
-Each territory is occupied by a fox family group. These often consist of a pair - dog fox and vixen - and their cubs. However, in areas where foxes are not persecuted and where there is a plentiful supply of food, a family group may contain several adults.
- In urban areas cubs are often born under garden sheds.
- A vixen stays in the earth with her cubs for the first two weeks of their lives.
-When they're about four weeks old, (usually late April or early May), cubs start to come out into the open, where they are often seen by city householders.
-Foxes often smell like they have been in a fight with a skunk, but the smell is actually a result of a small scent gland located beneath the tail near their anus. This skunk-like, sometimes known as "foxy," smell is associated with the courtship behavior of the red foxes. As one author has stated, "It is my nose more than anything that first tells me when foxes are courting," (Henry 1986).
-During courtship, a female and male red fox establish a territory by "scent marking." This is achieved by urinating on logs, rocks, and bushes, which in addition to the anal gland, serves as a secondary source of the fox's unique fragrance.
-The boundaries of this territory are characterized by the strong "foxy" odor. Foxes also have a scent gland on their tail, as do many canids, but the significance it plays communication is unknown (Lloyd 1980; Henry 1986).

-very wide and varied diet.
-crabs, dead seabirds, carrion, small mammals, especially field voles and rabbits, earthworms, beetles, fruit (particularly blackberries) and small birds
-Urban foxes glean large amounts of food. supplemented by scavenging from dustbins, birdtables and compost heaps. Unlike rural foxes, those living in some urban areas eat many small birds and feral pigeons.
-One study found that rabbits make up a larger proportion of its diet in the winter than in the summer, when it eats mostly rats and mice. Another study, in a different location, found that animals in general made up the bulk of the red fox's winter diet while insects and fruits were the summer preference. Besides rabbits and mice, red foxes eat raccoons, skunks, young opossums, squirrels, porcupines, songbirds, ducks, bird eggs, and a variety of other animal species. Plant foods include grasses, nuts, berries, fruits, corn, and wheat. They also eat carrion (Samuel and Nelson 1982).

-3 more, close related kinds from western-asia across Tibet, Nepal to Assam.
-about 10 related species in noth-west North-america
-The red fox can run up to 30 miles per hour and is able to jump over barriers 6½ feet high (Nowak 1991).