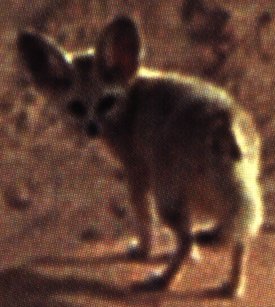 -rabbit-sized (smalest fox), very graceful. big eyes, long,(radar-)dish-like ears. Tail nearly bodylong, fluffy. Fur soft, longhaired, topside yellow-sandcolored (nearly invisible on sand), downside white (against color-difference through the shadow), braun-white Facemark. Tailend dark-brownish
-Males almost never weigh more than 3.3 lb (1.5 kg); vixens somewhat less.
-The ears, on the other hand, measure 6 in. (15 cm) or more, by far the longest in comparison with other foxes. Ears and pointed snouts serve to radiate heat. In addition to dryness, the environment is characterized by remarkable differences in temperature during the day.
-Because of this extreme temperatures their paws are furred much like an arctic one's
-It don't have the scent-glads other foxes have. (That's why some people out there keep them as pets. :(( )

-Northafrica from Marokko to Ägypt and Northsudan, Arabia.
-mountainous and desert regions throughout North Africa, as well as in the Sinai, and on the Arabian Peninsula

Activity: twilight- and nightactive. (But also seen at daytime)
- During the day the fennec usually stays in its widely branched subterranean den, but even here needs protection from the heat, and like all canids, it has no sweat glands. The bright color of the fur helps to control body hear, but at night the denseness of such fine fur serves to help the animal withstand the cold
-The activities of fennecs are nocturnal and seem to be instinctual.
-When keps in human care, they are also predominantly active at night. This distinguished them from the red foxes, whose rythm is largely adapted to human activity. Like all foxes, however, the fennec is easy to tame. An acquaintance keeps several of them in his house and garden, although this is not recommended for the fastidious. In any case, the animals adaptability and playfulness are remarkable. Even in the wild, the fennec seems to prefer to live in larger groups than is generally the case among other foxes. Little is known of its behavior or ecology. It has been reported, however, that several families sometimes live toghther in close proximity, sharing their dens.
-From the fifth week onward, play in front of the den.
-Both parents participate in raising the young, sometimes with the assistance of older siblings.

-Like all foxes, however, the fennec hunts alonem capturing primarily insects, reptiles and small mammals. It also consumes vegetation if available. It drinks available water, but is also able to survive for long periods on the water content of its food.

-existence in the wild localy in high danger,seldomly shown in Zoos.

- The supportive capacity of the biotops is fully exploited; pronounced deviations in population are rare. If the population does decline, for example, as a consequence of human activity, recovery is slow. In this they differ from many species in unstable ecosystems, which include the Arctic fox. These animals can adapt quickly to those catastropheis commonly occurring in their habitat, adjusting the number of their young to prevailing conditions.
That number can range from zero to twenty. Such animals are opportunistic in every way. The red fox stands somewhere between the two reproduction strategies of the fennec and Arctic fox. Fennecs were once more or less uniformly distributed throughout north Africa. Today, however, they are widely hunted in some areas, without reason. They pose no threat to pets or to human interests. With its low birth rate, it is particulatly susceptible to hunting. In many areas of its former range, it has become quite rare or even extinct, a sad fate for on animal that symbolizes, like few other animals have, the sparse desert life.